As plumbing and electrical and mechanical work are ‘roughed-in’ and we are getting ready to close our walls with sheetrock, I thought I would step back for a minute and look at the bigger picture both with schedule and budget.

When we started the project, I estimated about 6 months of construction.  I thought we would start in the second half of May but we ended up starting right around the beginning of June which would put a 6 month project completion around New Year’s.

There are a couple of reasons that we will need to extend about another month until the end of January.  One of these were DOB-permitting changes that caught us flat-footed at the beginning of September.  When we went to renew our permits (they expire whenever a GC needs to renew his insurance) the DOB wouldn’t re-issue them without a new ‘Superintendent of Construction’ license requirement effective 8/31/16.  This cost us about 2 weeks of time as we halted construction rather than work illegally with an expired permit.  Also, both with budget and timeline, I underestimated the amount of destruction and rebuilding that this addition would cause on the existing second floor and I, of all people, should know better by now.

Trying to work around the existing second floor bathrooms and bedrooms without removing them only slowed us down and now I am finding we still have to re-wire and re-plumb the floor as if we had nearly gutted it as well.  I often tell prospective clients that there are very few ways to ‘surgically’ alter only one specific area of a townhouse- i.e. the incision is never scalpel-thin and there is spillover to adjacent areas of the house that will then need work as well.  I know this lesson well but was a little over-optimistic with my house.  Apart from the re-plumbing and re-wiring, my existing shower bodies (purchased and installed 10 years ago) cannot be re-plumbed.  My existing lead shower pan has hairline leaks (possibly caused by the jostling of our current construction) so that and the shower floor tile will need to be replaced.   My exterior range hood exhaust got thrown away accidentally although we intended it for re-use.   I have gotten to dread phone calls from my otherwise totally pleasant contractor as I fear they will be to inform me that something else we hoped to re-use needs to be purchased again.  Renovation is not easy and not for the weak.  I firmly believe the end results are worth it.  An extra month and some extra money now will be less painful and hopefully forgotten when we have been living in our great new space for a year or two. 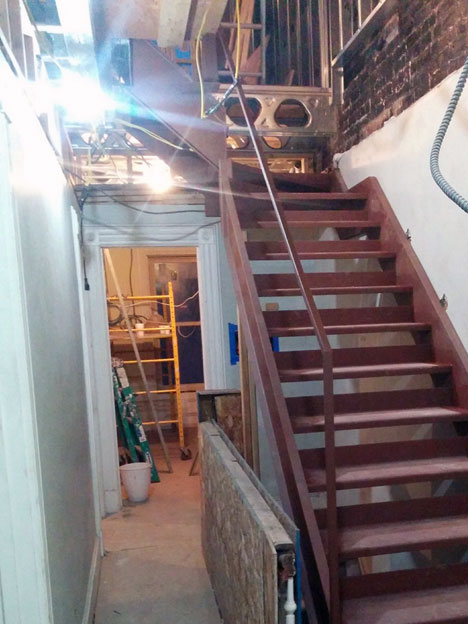 The steel stairs have been installed.  These will be painted black and receive a wood and steel handrail (the guardrail in the picture is temporary).  The treads will be made out of the old roof joists we removed.  These sanded down beautifully: 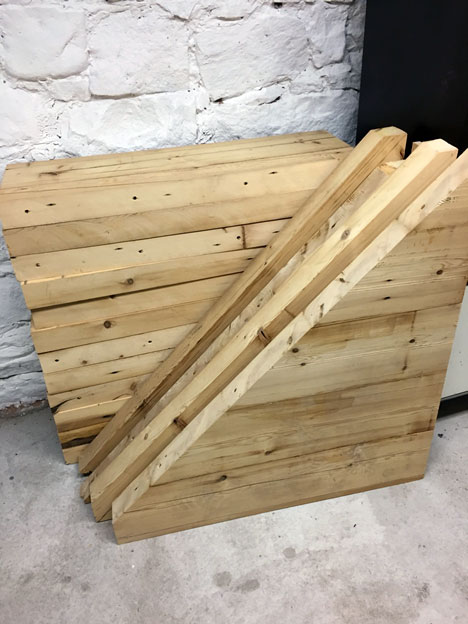 These are old pine and were cut in a time when trees really had a chance to grow before they were harvested.  Figuring the house to be from the mid-1880s, I wouldn’t be surprised if some of this wood came from trees that started growing well before The Declaration of Independence.

The carpenters on site have fitted these to each steel pan and stored them in the cellar for safekeeping, labelled by tread, to install later: 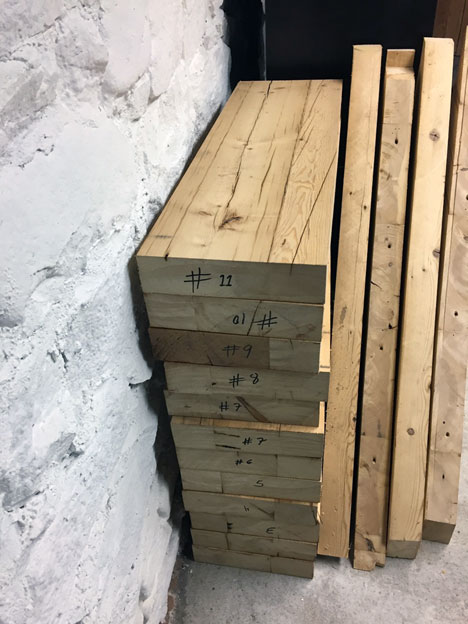 The sleekness of the steel and the warm character of the wood will make for a really nice pairing.

Meanwhile, the electrician and plumber are almost completely done with their rough installations and the HVAC installer is finishing up his.  We should be sheetrocking and closing interior walls shortly.

Below is a picture of the master bathtub with adjacent shower: 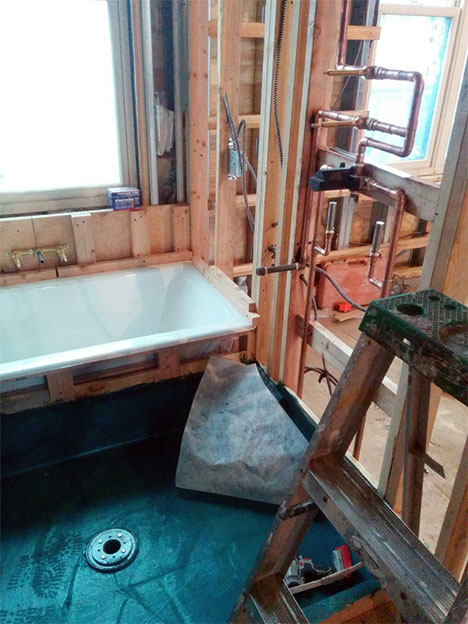 We spray-foamed all of the exterior walls as well as roof: 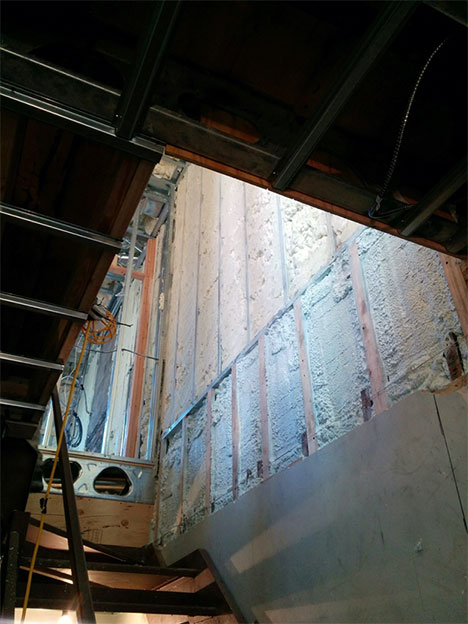 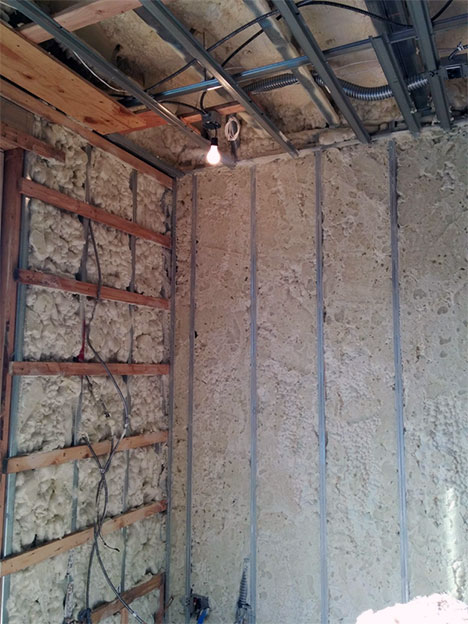 Also, the lead-coated copper standing seam panels have arrived along with the starter pieces, flashings, caps, etc. needed to put it all together: 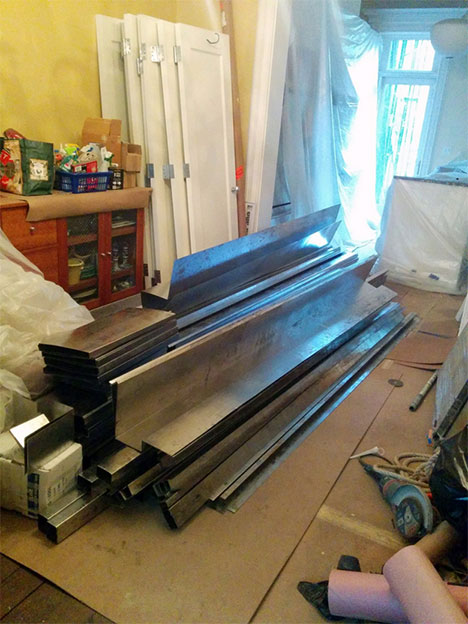 Our flooring arrived and is quite nice looking: 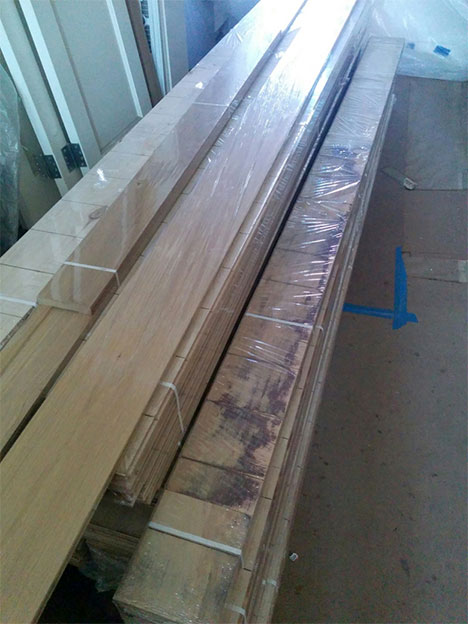 The rough looking board on the right is the underside of the engineered flooring that won’t be seen.  The board on top is how it’ll all look.